Still, Chennai. Coming to know my neighbors: men lugging silver jugs of water on a shoulder before sunrise; flower weavers and their kids trying English words; pruned, skinny uncles tying fishing nets on the corner; dogs under carts; cows. The security guard sheepishly smiles when I smile. The schoolgirls laugh.

Winter isn’t scheduled for this part of the world; the heat builds and builds. Warm evenings become hot mornings then muggy, heavy afternoons. The sun isn’t bright behind the haze but it’s strong. It cooks trash piles and a cocktail of natural waste—human, dog, cow, goat—that fills the gutters. Today, my nose is tuned to the smell of piss. Fumes rise from the asphalt. Beside the tables where the women sew marigolds and freesia into garlands, the smells weave around each other, neither one canceling the other. Seeking the contrast is something like a nose exercise. My nose seeks freesia. It finds pee. It finds freesias. Ah. There is no immediate in-between.

I offer the crude example to share a souvenir from my time away.

Okay, no. That’s not it. (Core Power will never have me.)

It’s this: when the world presents its extremes, how do I find calm in the center? In other words, where is yoga in this world?

Because it’s all extremes here. It’s a world of texture and color, divided into its polarities. It’s all oscillation, fluctuation from top to bottom.

On some streets, trash is piled against buildings. Traffic is incessant and not limited to wheels and feet. There’s hooves and paws. But one right turn and I’m lost somewhere else. It’s clean. Quiet. Like a bubble descended and captured the silence.

The food is spicy or highly spiced. If not, it’s rice or curd.

The water is bottled or slightly yellow.

Faces are stern until you smile. And then there’s joy, light, a laugh, a head bobble.

Even the hotel. When housekeeping closes at 11, the halls fall dark and silent. At 6, staff returns like birds thrown into a cymbal shop. They drop keys, brooms, phones, everything. They tell stories, issue orders or maybe it’s all lewd jokes that have become an appreciated alarm. (Thank you, Edison and Kalimuri, for the cleanliness and clatter.)

It’s all extremes. An overload for the senses in its fullness and emptiness. The only way, really, to remain calm as I interact with it, is to find myself happily lodged between the two. To find the center in me. At the point where the extremes collide and I get to experience both. Not in conflict but in concert.

Which works for just about everything. Anger around you? Stress around you? Awkward silence? Find your center. Yoga.

I signed up for this chanting and meditation workshop with Kausthub Desikachar and his mother, Menaka, because it promised to honor the divine feminine. Another extreme. One in western culture often ignored, misunderstood, hidden behind more masculine efforts to achieve, command, attack and acquire. All of which are divine as well. Just slightly out of balance when its counterbalance is absent.

So for two weeks, we’re chanting prayers and poems about the consorts of the Vedic gods. The women who share their power and, indeed, enable it with their energy. About abundant and loving Lakshmi. Wise and creative Sarasvati. Powerful mother Durga and blood-drinking Kali. Without the creative impulse and energy of these forces, the gods who stand beside them would be nothing but inert consciousness. Without the goddesses, the material world and our unique, seeking souls traversing it wouldn’t exist.

Nor would we be able to create life, nourish it, heal it and liberate it.

It’s a beautiful, spiritual way of remembering that the world has its way of sorting itself into extremes. As we navigate them, we ascribe to them one of the most elemental dualities we know: the man and the woman. The masculine and feminine. It’s so like men to sit quietly; it’s so like women to chatter. Men don’t ask direction; women have intuition.

Of course, the characteristics aren’t actually gender dependent. We’re all both—braun and beauty; stability and chaos; gods and goddesses. But honoring each gives us pause to remember both sides of the coin. Seeing the dual nature of the world reminds us to seek balance as we interact with it. To give, there must be a receiver. To do, there must be skill. The speaker wants a listener. Ideas want action. A lover wants her beloved.

We suffer when we forget. We become agitated in our imbalance.

I know the words divine and god and goddess (especially) provoke eye-rolls and shudders. So be it. There’s as much poetry in a resounding no as a lyrical yes. So read the poem. And consider it.

Kausthub’s grandfather and the primary teacher of what became western yoga, TT Krishnamacharya, said that you can’t remove Ishvara from yoga. He meant god. He didn’t care what god you choose to include or how you choose to envision her. Your god, my god, some god. So long as you cultivate devotion. In devotion, your heart thrills to connect with others and the whole world. Especially with your own true self. And that’s Ishvara. Safely invested in others, the whole world and you. Male, female. Divine. Yoga. 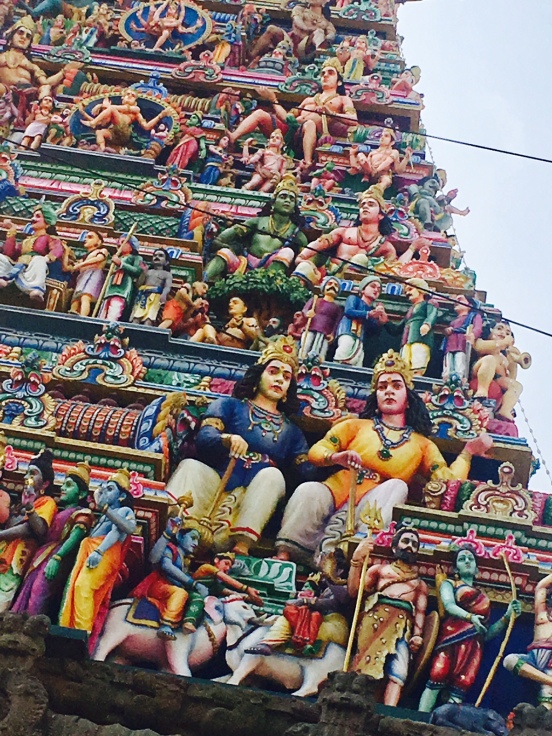